On the 7th April 2012, I, Nicholas O’Brien, set out for a 5 month cycling and recording adventure around Europe. I gave the project the fairly explicit title “Record and Ride” and rode an old bicycle named after the physicist C. Doppler. The idea was to travel and record artists along the way whilst sharing the recordings on this website.  There was to be no set route, instead each artist was to forward me onto the next. I was hoping to physically travel through a hidden network of artists.

I started in Oxford and, naturally, the next stop was London. After a week in the capital, I realised that travelling far and moving regularly wouldn’t work by relying solely on the artists. Sticking to the original concept would result in me going round in circles, never leaving the city. This showed a phenomenon that I regularly witnessed – artistic connections are often confined within a city. Given that I only had 5 months, I decided to change the rules a little. I made the decision to head towards Poland and let my website followers also connect me to artists. As a result, contacts started multiplying – the project was rolling. I became far more involved in deciding my route by picking and choosing from the different options I was sent.

Over the next few months, I went through northern France, Belgium, Holland, Germany, Poland, Slovenia, Croatia, Montenegro, Italy (Bari), Greece, Israel and the United Kingdom. I cycled most of the way. However, I had minor health problems in Poland and had to resort to trains. Once in Slovenia I resumed the cycling. Again, in Greece I abandoned the cycling and sent Doppler to Edinburgh whilst I flew to Israel. 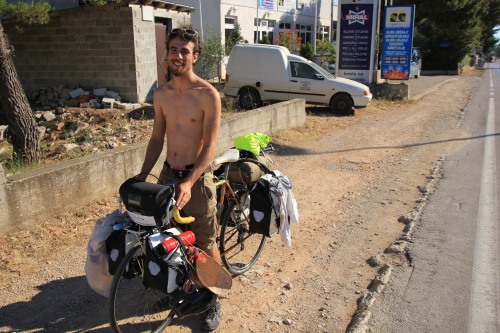 The trip ended on the 8th September 2012 with 53 artists recorded, 182 tracks and over 5000 km cycled. However, the project is still running. Over the next few years I hope to put a CD and book together about the travels, the people I met and the music I recorded. Also, I plan to organise a day-long concert regrouping the record and ride artists – but for this I need to find funding. In the meantime, I have already had thoughts about organising other similar trips.

If you have any questions about the trip please feel free to email me at niko.brian@hotmail.com.

In the meantime, I can only recommend browsing through the recordings as there are lots of great performances!

Find here the recordings placed on a map.